Which Four Wireless Microphone Mistakes are You Making? 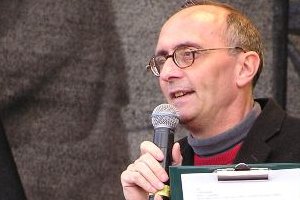 Is it on? Will it be too loud?

There are four wireless microphone mistakes that get a sound tech in trouble.  The first mistake is one I’m often asked about.  I will be upfront and say that I’ve made two of these mistakes. Two, maybe three.  No, two.  Forgive and forget, right?  [sigh]

Why does this happen when the gain is turned to zero?  The answer is simple and the solution even simpler.  The wireless pack has a gain control.  If the pack’s gain is too high, then it’s sending a massively strong signal to the mixer.  The mixer can’t handle it.  So, even with the channel gain at zero, the signal bleeds through.

Correct this by following these steps;

A final note on this, check all input devices for proper signal levels coming in.  Nothing like fading out a music track, from a computer, only to hear it still playing in the house speakers.

When should the batteries in wireless microphones be replaced?  The answer is NOT, “when the mic dies.”  It’s not that any of us want the embarrassment of having the pastor’s microphone die mid-sermon.  The problem is battery management is often the last thing on the Sunday-morning to-do list.

Make battery management a priority.  Keep the rechargeable batteries recharged.  In case of multiple weekend services, check the battery meter on the wireless devices between services.  If it’s low, swamp in fresh batteries.

Not using rechargeables?  Not a problem.  Know how long the batteries should last under normal usage, check their charge, and replace them BEFORE they die.  We use non-rechargeables in our wireless guitar/bass packs.  They last for the full Wednesday night practice, Saturday practice, Saturday service, and through both Sunday services.   We put new batteries in immediately before the Saturday service.  This way, when (or if) they do die during use, it’s during the next Wednesday or Saturday practice.

3. Let other people turn them on (padlocked and chained)

I HATE microphones with power switches.  The reason is simple; there will be problems.  People on stage will accidentally turn them off and not think to check they are on before talking.  In the wireless world, by their very nature, the microphones NEED a power switch.  That doesn’t mean you can’t keep them from using it. [Evil Laugh]

Many wireless microphone packs have lockable controls.  In the Shure’s we use, by holding down the SET and MODE buttons at the same time, the microphone is locked in the ON position.  Even if a singer switched the power switch to OFF, the microphone would stay on.

And then there’s the tape.  I still see wireless handhelds with a switch on the bottom and no way to digitally lock the power.  Grab a roll of black electrical tape and cut enough tape to cover the switch.

For people on stage who still insist on having control over the on/off switch, bring out your mobster accent and tell them this; “use can do watt use want but ifs there’s a problem, use be swimmin’ wit da fishes.”  Just an idea.

I can hardly bring myself to tell the story.  But, for your benefit, I’ll do it.

I walked into a church for an audio consult and spied the Mackie SR 24-4, the standard mixer for churches back in the 1990’s.  There were four wireless microphones.  On the mixer, they were labeled A,B, C, and D.  But here’s what the channel assignment looked like;

In general, like-minded inputs should be grouped together and logically ordered.  For example, all vocal microphones should be located next to each other on the console, in the order they are seen on stage.

Using an organized layout leads to fewer mistakes, faster mixing, and channel mix comparison.  What I mean by the last one is by having all related channels next to each other, it’s easy to compare EQ settings for problem-solving.  Let’s say the backing vocals set but something seems out of place.  By looking at the vocal channels next to each other, you can easily see if one has an EQ setting that might be higher than it should be.  Even with a digital mixer, flipping back and forth between two screens for comparison is easier.

Prevent wireless microphone bleed by correctly setting the wireless pack’s gain.  Practice good battery management so batteries are replaced before they die on stage.  Keep microphone control in the sound booth by locking or otherwise covering the power controls on wireless microphones.  Finally, don’t hunt and peck your way around the mixer; order the channel inputs in a logical manner.

Oh, and if you haven’t made any of these mistakes, be grateful someone taught you well.