Is Over-Compression Killing Your Vocals? 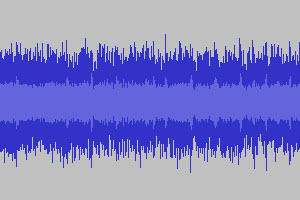 Mixing a new singer is a challenge because you don’t know how they’re supposed to sound.  I was going through this the other week.  It wasn’t until I revisited what I thought was right that I found out it was all wrong.

Elizabeth’s a great singer and it’s a pleasure to mix her vocal – but I struggled.  I couldn’t get her vocal to pop above the instruments.  My mistake, I found, wasn’t in my EQ work but in my compression.

Compression’s a great tool for reducing volume spikes.  It’s also great for punching up vocals by compressing the overall vocal range and pushing everything a little louder.  The problem is it’s easy to over-compress a vocal, as I’d soon find out

Look at the photo below and note the spikes.

Peak compressors work by compressing these peaks so the peaks are in closer proximity to the RMS (average energy level – more on this in a moment). This means the very distinctives of the voice are brought closer to everything else.  It also means when a vocal line is over-compressed, you lose the clarity and individuality of the vocal.

How did I figure out I’d over-compressed it?  I turned off my compressor and her vocal blossomed in the mix.  It was then a matter of turning it back on but increasing the threshold level before the compressor kicked in.

A compressor measures the signal level of the assigned input, like a vocal channel, and applies gain reduction when the signal level exceeds the configured threshold.  In short, when the vocalist sings louder than you want, the compressor decreases the volume.  How much is dependent on the set ratio.

A ratio of 2:1 means for every two decibels over the threshold, the signal will be compressed into one decibel.  If they went 8dB over then the channel would only pass an increase of 4dB.

Behind the scenes, it’s more complicated and that’s where things like over-compression come in.

Here is a partial image of a song.

Notice all of the peaks that stand out.  They make up the songs thumbprint.  Seriously.

Have you ever wondered how music identification apps, like Shazam, work?  How can they figure out the song title by listening to a few seconds of it?  It’s detecting the peaks and their relationship to the other peaks among a few other things.  It then compares this peak thumbprint to all of the song thumbprints it has on file.

When compression occurs, if using a Peak Compressor, the distance between the peak and the 0-line are reduced, above the threshold, and it’s an immediate change.  I saw it described as swashing someone’s face.  The nose is now much closer to the face and a bit distorted but it’s still recognized as a face.

As the peaks are squished down, it becomes harder to hear distinct frequencies apart from everything else.  A little squishing is ok.  Too much squishing and it’s over-compressed.

Once the peaks are squished, we have more headroom to increase the overall volume level.  That’s where I took it too far in mixing.  I wanted to push the volume more than the compression could handle without losing clarity.

I’ll keep this short and sweet.  RMS is the average energy level value (loudness) of sound over time.  Technically, it’s the square root of the mean of the squares of the values.  Sounds like an IRS tax calculation, if you ask me.

The closer the peaks to the RMS, the fatter the sound.  Fatter can be good for an electric guitar but not necessarily for a vocal.  This is where things get dangerous.

Low end frequencies contain more energy.  The more low end in a channel mix, the higher the RMS.  The greater the RMS, the less distance between the RMS and the peak – the less room for compression.

A compressor can also work on the RMS for compression. While the peaks could get through, the average volume could be reduced.  A problem with RMS compression is it’s slower than peak compression because it has to calculate the average before compressing.  A look ahead time can be set to avoid volume bursts – not the same thing as quick peaks.

RMS compression enables the leveling of a sound, which is great for the recording realm but isn’t a need most of us face in the church audio world.

Compression, peak or RMS, changes tone for better or worse.  You might want to fatten up a sound or simply control the volume.  The closer the peak to the RMS, the more the tone changes.  This affects how the whole mix sounds.  For example, compress the drums and a guitar might sound brighter.  An RMS compressor could make the drum sound heavier in the mix. Could you do the same with a peak compressor?  That’s up to you to try.

A compressor is a great tool for sculpting a mix but beware of over-compression that can be identified by a loss in clarity.

Compression can be a tricky but so can gating. Check out my free 10-minute guide to gating.