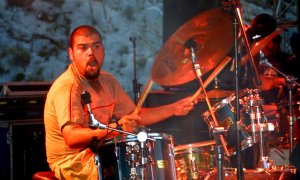 Take back control of the drum cymbal volume.
Photo provided by jorgemkt

“If there is a devil, then he created the crash ride,” joked Robert Scovill during a Gurus of Tech 2013 breakout session.  By the laughter from the audience, it was obvious that many of us have problems with crash ride cymbal volume control.  The minute our drummers put on their headphones they start filling the room with a ton of extra cymbal sound.

Scovill told us his quick-and-easy solution to the crash ride problem was taking it away from the drummer right before practice. Again, another joke in which many of us laughed and then thought, “I wonder if I could get away with that.”  That’s when Robert gave us a gold nugget of wisdom on dealing with the crash ride and the drummer’s volume.

First, the Purpose of Overhead Microphones

“Overhead microphones are NOT cymbal mics, they are DRUM KIT mics,” said Scovill.  There are many ways to mic a drum kit; using a single overhead, using a few microphones, and using a bunch of microphones.  It’s usually a matter of what you have available and/or what it takes to get the sound you need.  Yet, where do we place those overheads?  Right over the cymbals.  It’s easy to equate the overheads with the cymbals.

Overhead microphones should produce a blend of the entire drum kit.  Using two overheads, you should create a blend with the snare centered in the mix.  A great way to do this is by reviewing your overhead microphone placement.

Place the overheads in an XY-pattern so you are pickup up all of the drum kit pieces with the snare drum feeling likes it’s centered in the mix.

Once you have set up the overheads so they create a BLEND of the entire kit piece, then it’s time to re-build the drummer’s monitor mix.  Even if they use a personal IEM mixer, have them follow your direction.

Step One: Turn down the drum mix in the drummer’s monitor.  If they run an IEM, ask then to turn their drum kit pieces all the way down in their monitor mix.

Step Two: Turn up, or have them turn up, ONLY the overhead microphone channels.

Drummers play loud for a reason and sometimes the reason is a messed up headphone monitor mix.  If the cymbal volume in their monitor isn’t properly set, then plugging up their ears with IEM’s or covering them with cans will cause them to play certain kit pieces louder in their mix.

Crash ride cymbal volume control is about reviewing and/or modifying your overhead microphone setup and creating a nice blend that represents the whole drum kit.  Then, feeding the drummer the overhead microphone mix, with the snare drum centered, they will hear every piece and they should start playing quieter.  If that doesn’t work, you can take away the crash ride.

**This article not available for syndication.