How to Eliminate Frustration with Stage Amps

Guitar and bass amps on stage can be frustrating as stage noise grows and house mix control seems to be hampered. There are valid reasons for these amps so let’s look at the options available.

There are three ways of working with guitar and bass amplifiers and the choice is up to you.

1. Use an Amplifier on Stage

Stage amps can be used and you can still have a good house mix.  Much of the success starts by pointing the amplifier in the right direction. 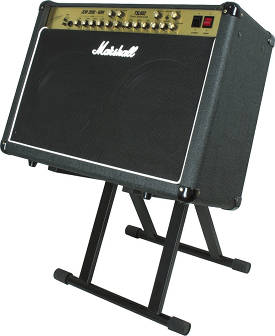 In the case of guitar amplifiers, the guitarist likely wants it used as a monitor, so make sure it’s pointed at their head.  Amp stands like this one will do the trick.

In the case of large stacks, make sure they are just far enough away to hear – if they were right up next to the stack, their head would be too high.  Just beware of where it’s pointed – instead of pointing it at the front row, see if it can be angled to a walkway or across the stage but angled out a little so the sound doesn’t bounce directly back and forth.

With the guitar amp, either mic the amp cabinet and use a minimal amp volume or have the musician set the level.  The problem with the latter is when the musician uses different effects pedals and one sends out a significantly higher signal than another so the amp volume is different from one song to the next.  This can be minimized if the guitarist takes the time to work on their pedal setup.

When it comes to bass amps, the musician is much more likely to want it as a monitor as there is also the feel of the bass notes that are played.  The low bass frequencies are omnidirectional and that’s good.  However, don’t blast out the front row by pointing the amp to the left or right of the stage. Just make sure it’s angled at a wall instead of pointed at a 90-degree angle so the sound best moves throughout the room. This way, you don’t need to mic it.  But, you can if you want.

2. Remove Amplifiers from the Stage

Before you musicians hate me or you sound guys love me, there is a third option I prefer but we aren’t there, yet.

The musician can route all of their effects pedals through a passive DI box and send the sound to the mixer.  Using this method, monitoring would be done via floor wedges or in-ear monitors.  Some musicians will complain their guitar tone isn’t as good.  That’s debatable.  There are amplifier modelers in modern guitar pedal boards and a lot can be done with the pedals they have.  I’m not here to debate the point but if the musician is willing to part with the amp or at least try playing without one, work with them and see what can be accomplished. 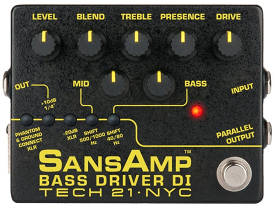 This one is a bit harder because of the amount of that low-frequency feel I mentioned.  I’m not a fan of getting rid of the bass amp entirely but there are a few ways to work without one.  First, use a good active Bass DI box, such as the SansAmp, which provides all the amplifier controls to modify their sound to get a good tone.

Next, add a buttkicker either mounted under the stage where the musician stands or inside or on top of a small platform for the bassist.  Seriously.  It’s called the buttkicker and it’s made to get that feel back when paired with in-ear monitors.  You can check out the buttkicker here.  Years ago, my friend David McClain wrote about it…in case you don’t believe me. :)

This is my personal preference but I know it’s not ideal for small rooms.

I prefer, even with in-ears, to mic the guitar amp and use that for the mix.  If I’ve got a Marshall full stack sitting on stage, I’ll mic it for the tone, even if the guitarist is on in-ear monitors.  I’ll set it loud enough that I get the tone but low enough that it doesn’t affect the house mix.  You can hear it if all my channels are muted but it disappears when the house mix is jamming.  I will note there are some great sounding small amps so you can apply the same idea.

Test microphone placement in front of one of the amplifier speakers.  There is a big difference in sound between a mic placed in the middle versus the outer edge of the speaker.  Move throughout to find the best spot.

Another option is to take a line out of the amplifier.  However, it does not have the same tone as what the speakers produce.  Close?  Yes.  The same?  Not exactly.

The options are much the same and, as mentioned in the first part, make sure you know where you’re aiming.

Regarding the microphone, consider the following:

The advantage of keeping it on stage is you don’t need to get a buttkicker, unless you go the line out option.

There you have it, several options for dealing with stage amps.

If you’ve got the time, money, and musician-backing, the other option is to use isolation cabinets, a.k.a. iso-boxes, that are sound-proof boxes where you place the guitar amp and a microphone.  This way, you get zero stage noise and maximum tone.  These are placed backstage.

Is it the best option?  In my opinion, no.  But, in the case of small stages or where amps aren’t allowed on stage (some people find them visually disturbing – I know, right?) then this is an option.

In the case of iso-boxes, you’ll need to get that signal from the guitar to the amplifier and that’s not easy.  An instrument cable isn’t much good over 15 feet so you have to go the interface route.  In short, the musician’s guitar plugs into a DI transmitter box on stage and that output balanced low-Z XLR output can run backstage where it goes into a receiver DI that converts it back, and then a cable runs from the DI receiver to the amplifier.  Radial shows it with this diagram:

If you want to go this route, you’ll need an iso-box and two interface boxes.  I recommend the Radial SGI Studio Guitar Interface.