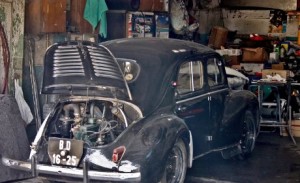 The Three Steps to Cleaning Up Your Vocals – Step One, Get Rid of the Junk. Photo provided by jmjvicente

Performing the vocal EQ’ing process time-and-time again, have you ever wondered if there was a better way?  I’m a process freak.  However, I’ve found the best way for improving a process is starting a new one from scratch.  That’s how I arrived at the following process I use for mixing my vocals.

EQ’ing a vocal is a lot like cleaning out a messy room.  Take for instance, the messiest spot at your place.  It could be your garage, your bedroom, or a closet.  If you were to clean out your messy garage, you’d likely do the following;

The last time I cleaned out my garage, I threw out my regular process and started from scratch.  I drew out the dimensions of my garage on a piece of paper and sketched out where everything should ideally be located for efficiency and increased floor space for parking.  For example, the recycle bin was put by the back door and the lawn mower was put next to the garage door for easy access.  During my cleaning process, I had a reason for moving and cleaning; creating an efficient order wherein less space was required for the same stuff.

Take your current process of cleaning up your vocals and toss it aside.  Let’s now look at how you can apply the same process I used for cleaning my garage.

Step One: Throw out the sounds you don’t need

Your vocal EQ controls will be your EQ knobs for low, mid, and high frequencies as well as a high pass filter (HPF).  My first step is turning on the HPF.  First of all, there isn’t anything in that super low-end, coming from a vocalist, that’s going to be beneficial…unless of course I was mixing Barry White.  Secondly, in case your vocal microphone is picking up any low-end frequencies on the stage, you will have those removed from the channel.

Step Two: Clean up the sounds you do need

At this point, let’s say you need the vocalist’s full range of frequencies.  This includes everything from around 80 Hz to the high harmonic frequencies.  Focus on cutting out the bad frequencies such any sibilance you hear in the 5-7 kHz range.  You might have a singer with a harsh sound so you cut bit with a narrow bandwidth somewhere in the 2.5 kHz to 4 kHz range.  They might need a bit more bass in their voice so you boost in the 200-600 Hz range.

Step Three: Improve the organization of the sound

Sound organization, regarding vocals, is about getting the vocal to fit where it belongs.  Let’s look at a lead vocal and a background vocal.

The lead vocal needs to belong on its own.  It needs to stand out from the background singers.  It needs to be clearly heard so the congregation can easily hear what’s being sung.  Considering these needs, you need to mix the lead vocal channel against the other vocal channels.  You might have to change your settings from step two, but that’s OK.  Focus on the mid-range frequencies.  Also, look for a boost in the high frequency range.  Boosting high frequencies above 8 kHz will add what’s called “air” or “breath-iness.”  Such boosting will add clarity to the voice.

High frequencies boosts also give you a form of spacial separation in your mix – don’t think it’s only reserved for lead vocals.

The background vocal(s) need to be organized together.  Imagine four background vocals as producing a single voice.  This voice doesn’t have to be clear.  It doesn’t even have to take center stage and in fact it shouldn’t.  The background vocals should support the lead vocal by giving depth to the song.  Mix these channels together for a unified sound.  It’s also a great place to later add a nice bit of reverb for that depth.

Long ago, my process for EQ’ing vocals was about turning knobs until it sounded like I wanted.  I had a process for it, but it wasn’t the best.  If I recall, the HPF wasn’t even engaged until I was done with my EQ knobs.  Then one day, I tossed that process out the window and started from scratch.  My new process became the three-step process of pitch it, clean it, and organize it.  Not only do I get significantly better sounding vocals but the time I spend eq’ing vocals has dramatically decreased.

Better vocals in less time…isn’t that what everyone wants?

Check out the Mixing Vocals Guide.