How Many Drum Microphones Do You Really Need?

Drum mic'ing is an art form you might be missing. How many drum mic's do you really need? Do you have that many mixer channels to spare? Are you feeding your drummer the right mix? Four microphones might be all you need. The Glyn Johns technique uses only FOUR microphones for capturing a full drum kit. Today, let's look at exactly where those microphones should be places and listen to how it sounds. 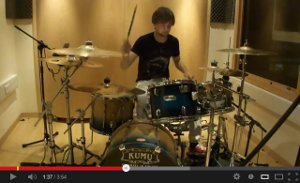 Drum miking is an art form you might be missing.  How many drum mic’s do you really need?  Do you have that many mixer channels to spare?  Are you feeding your drummer the right mix?  Four microphones might be all you need.

My current stage setup includes an acoustic drum kit with eight microphones.  Eight?  Mmmm, that sounds about right.  The larger the room, the more control you want over the drums.  What I mean by that statement is that in small rooms, you can get a lot of stage volume out of your drums without microphones.  I occasionally work in a small venue with ZERO drum mic’s…and it works because the room is small enough.

The eight microphones are easy to fill up when you have microphones for the kick, snare, individual toms, cymbals, high-hat, and then the overhead microphones.  This gives great control of the whole drum kick and allows me to emphasize different parts of the drum kit depending on the needs of the song.  But what about when you don’t have enough channels or enough mic’s or wonder if you really even need that many in your room?

Glyn Johns is a recording artist who has worked with many of the big name bands from the classic rock era.  He is even attributed to giving the Eagles their distinct sound.  One of the innovations in drum mic’ing came from him and is called the Glyn Johns technique.

The Glyn Johns technique uses only FOUR microphones for capturing a full drum kit.  I’ve even it seen using three but for today, we’ll use four.

You now have two overhead microphones that capture the full drum kit and you have control over the kick and snare.  When mixing, you’d bring in the overheads, mix those for the best blend, and then add in the kick and snare for filling out the mix as needed.

How does it sound?  I found this unique video of someone playing with the Glyn Johns technique to a Paramore song, minus the drum tracks.  Enjoy.

What about the drummer?  Pipe out an overhead to his monitor.  Then, as needed, bring in the kick and the snare.  The key to making this work is in having the overheads capture the full kit sound.  You don’t want them to be too heavy on one kit piece.