Why Your Mixer Channel Order Is Slowing You Down

There are gremlins in my garage!  Whenever I work on a project and turn to grab a tool, be it a screwdriver or tape measure, it’s not where I expect it to be.  Gremlins, I tell you!  Or, it’s because my workbench and tool cart are a mess.  I’ve seen mixer channels equally messy. Today, you and I are going to do something about it.

There’s an industry standard for mixer channel layout.  It’s not a hard and fast rule but it is the standard. It’s the standard because it’s a logical layout so it’s easy to find what you need and channels are ordered in a way that makes sense – all drum channels together, vocals together, etc.  It also means when you get called at the last minute to mix for someone else, you know where the channels are located.

Before you look at the below list and assume that’s all you need to know, know that there is a problem with it.  The problem is that using digital mixers with channel layers or banks means it might be time to break up this order.

Notice how the low-end instruments tend to be at the beginning.

Now let’s break this out further. The numbers aren’t for the specific channels, only the order:

I’ve used the color-coding to help you see the groups of similars.  Note the channels with Left/Right would occupy two channels.  For example, Choir Left could be in channel 17 and Choir Right would then be in channel 18.

Before we get into digital consoles and exceptions, I want to look at a smaller channel setup.  Not every church uses that many channels. So, here’s something that would work for a church I know in my area.

The logical order is still there.

The Exception with Digital Mixers

Digital mixers can present a problem.  Unless you’re on a digital console that displays all of your channels on one layer, then you’ve got at least two layers of input channels.  Then what do you do?

I like to use a logical break.  For example, I’ll put all my instruments on the first layer and then everything else, starting with vocals, on the second layer.  This means when I switch layers, I know my lead singer will be the first channel in the layer.

A quick note on the lead singer.  We have multiple singers and each will sing lead on a different song so while we use the “lead vocal” for the worship pastor, we know that the true song leader can be different per song and have that noted in our notes / Planning Center schedule.

In the original list, the effects channels were listed last.  With digital mixers these could have individual effects channels such as with a channel for vocal reverb, or they might occur in their own layer per the design of the mixer manufacturer.  Or, you could also assign them to wherever you wanted. The flexibility of digital routing is almost endless. 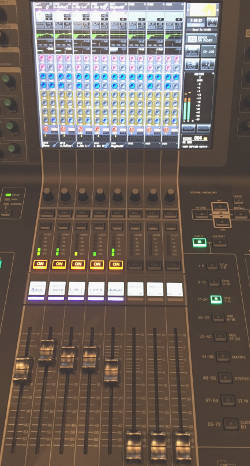 I work in this area.  The Yamaha CL-series (and some other Yamaha consoles) uses the Centre Logic design so the eight channels in the middle of the console are mapped directly to the screen about them – SEE IMAGE BELOW.  This means, we think in layers of eight. This usually means we are dealing with four layers – at least as far as a direct screen relationship.

Here’s our layout by groups of eight:

If you were to look at our groups of eight channels, you’d find some of the channels were empty. For example, the Singing vocals bank would have the first four channels of vocal mics but the later four would be empty.  Why empty? We did this for a few reasons:

Here is the custom layer I use on the far right-side of the console:

This enables me to have quick access to the channels that are most likely to need altered during the service.  We run a welcome video at the start of the service, an intro bumper before the sermon, and then might use another as a sermon illustration or video announcement.

Therefore, my first sixteen channels that I see on the left side of my board are all of my instruments.  On the right, are my vocals and video, and then the Centre Logic area I can use either if I have more channels or want to display those I want to modify for anything other than volume. For me, it’s usually the guitars and keyboards that are in there.

In case you haven’t guessed it, with my channel layout on the CL5, I cheat a little by setting it up so I can immediately access all of my faders for volume control and then only bounce between layers to access other mix controls in the Centre Logic section.

Here’s the layout of the CL5 so you know what I mean.

Use the first two layouts in this article to create a channel assignment list on your mixer.  Use a sheet of paper or a spreadsheet to do this. Once they are in the right order, then go to your mixer and make your changes. Don’t forget to move those cable inputs around the back of your mixer or if it’s digital, modify the routing.

If you use a digital mixer with layers, look for logical breaks. Also, decide if you’re mixing would be aided by using a custom layer for quick access to key channels.

In the end, you’ll find your mixing process to be very fluid because you’re no longer searching for the channel you need.

Along with using an optimal channel layout, as further detailed in a chapter in Audio Essentials for Church Sound, also look at creating mix groups for similar channels. For example, all vocals would be in a group, all drum kit pieces would be in a group, etc.
We even have a group just for the kick and bass so we can control the low end in the room with only one fader. It’s great to have these groups for easier control of things like backing singers and the whole drum kit.