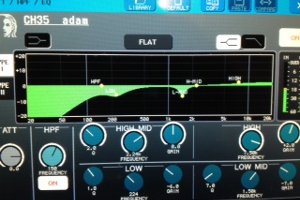 [Guest post by: Jose David Irizarry. Jose does a great job of capturing the work required for vocal mixing.  I call this the “shorter” guide because if you’ve read my vocal mixing guide, you’ll know why. That being said, Jose brings in some great stuff not  covered in the guide, such as mixing vocals like musical chords…read on to see what I mean.]

In general, bass and drums are the cornerstone of a musical theme in a band. Then guitars, keyboards and other instruments complement the harmonic setting of the musical arrangement. Finally, on top of all this, vocals are the crown jewel of the song.  I’d like to direct focus to vocal mixing.

The Source: A Human Voice

The human voice is one of the most—if not the most—common sources of sound. It has a wide frequency range (75 Hz—8 kHz, including harmonics), comparable to that of the piano. The human voice also has a wide dynamic range covering an astonishing 80 dB (40—120 dB).

You can expect a lot of variability and stability issues. A sung melody can contain a sample of the entire dynamic range just in a single verse, an example of how much its intensity can vary.

To capture and reinforce vocals for live performances, the most foolproof technique is close mic’ing. You need to have, at the least, an idea of how the vocals sound (refer to my previous paragraph), as well as the microphone handling technique of the singer(s), in order to make a good decision on what mic(s) to choose from (assuming you have this luxury). Know your mics—know their characteristics, the types, the polar patterns, the strengths and weaknesses.

Some voices may take advantage of the proximity effect that certain mics provide to accentuate the low end of a weak voice, but sometimes a mic with a more open polar pattern is necessary in order to be able to capture an exited jumping singer. Using a single mic for two singers at the same time generally isn’t a good idea unless you’re using the right mic in the right setting.

And in general for live applications, the tighter the polar pattern, the better and cleaner the vocal pick-up will be. It’s advisable to use mics with a directional pattern as opposed to an omni-directional pattern.

Another tactic that can help is to train vocalists on the proper use/handling of mics as well as the various types. They should understand basic mic properties and polar patterns—this knowledge can help them do a better job.

In addition, it’s usually a good idea to use high-pass filters (roll-off at 70—100 Hz) on vocals. HPF also helps in eliminating background/stage rumble and mic handling.

When mic’ing an ensemble or vocal group, it’s a good idea to use the same mic for all vocals. Remember that different mics have different polar patterns and frequency responses, and this can complicate the EQ of your stage monitors when trying to eliminate problematic frequencies.

The second stage after capturing the voice is a good preamp. If your console/mixer lacks this, acquire and insert a quality external preamp. There is a huge variety and at different price-points to choose from.

The preamp will define the quality of the signal being passed to the rest of the audio path. EQ for the voice can be tricky. My approach is to eliminate what is not needed, like a sculptor remove the unnecessary material from the stone to uncover a masterpiece. Keep EQ flat as much as possible, only eliminating those frequencies that cause trouble, particularly mid-lows that “opaque” the voice.

Between 250 Hz – 1.5 kHz, a notch filter can help in reducing nasal resonances which, most times, are annoying. This frequency is different for each person, and is created by a combination of the natural resonance of the nasal cavities and the skull. In certain cases, a boost at 3 kHz can add clarity to the voice, making it more intelligible and/or helping it stand out (cut through) in the mix. A boost at 5 kHz can add brilliance, while a boost in the 8 kHz range adds “air” or high end to the source material.

Another frequently used treatment is compression. Unfortunately, a lot of folks don’t have the slightest idea of how to apply compression to a voice. To me, it’s both science and art, and took me years to really understand it. I continue to experiment and search for new approaches and techniques.

As with any other piece of gear, fully understand your compressor (read the manual, it was printed for a reason). Compressors have personality. A particular unit may work beautifully well for one thing, such as drums but, may be terrible for voice. After identifying the right compressor for your needs, use it on all vocals (especially on the worship leader or lead singer).

Remember that what the compressor does is to reduce the dynamic range of a variable signal, confining it into a smaller range. The ratio and threshold define the upper limit of this range, and the output compensation defines the lower end of this range. Without it you’re only half-done. Properly used compression should not be noticed.

A lone singer in a band is usually rather easy to mix—make sure the lyrics can be heard intelligibly without overpowering the band. Toss in background vocals (BGV) in addition to the lead and the mix can easily get out of control.

The EQ approach for BGV is different than for lead vocals. You can be more aggressive with BGV EQ to keep feedback or bleed under control (increased amount of open mics) without affecting their overall appearance.

Pay special attention to the lead vocal mic. The lead vocal or worship leader has to be clearly distinguished without overpowering the others. The lyrics, as well as any spoken words during the performance, need to be heard clearly by the audience. The BGV and/or choir level must fit in the whole mix.

A little background in music theory: chords. When there’s a lead singer and a BGV group, it’s likely that the BGV group is doing a two-voiced harmony. By adding the lead’s first voice (or melody), you now have a three-voiced chord for every note where the BGV sings. It’s like a piano where each finger playing a key represents a human voice. Fully defined chords are composed of at least three notes. Each note contributes to the quality of the chord (major, minor, seventh, ninth, augmented, suspended, etc.).

The melody is always the first voice (typically sopranos in choir setting). If one of these notes can’t be heard, then the intended quality of the chord is missed. Translating this into the mix, make sure that all voices are present. In live mixing, I’ve noticed that the BGV singing the first voice requires a little boost over the other vocals.Unison—one note (same frequency)

A) Identify each voice’s voicing, especially the first voice or soprano. The harmony of each chord has to be heard (quality).

B) Pair equal voices (people singing exactly the same thing), try to make them sound like one (level wise).

C) Balance each group relative to other groups – consult the musical director or group leader to get feedback about the balance between the different voicings. Sometimes a background vocalist may sing the melody to support the lead singer.

D) The group with the first voice or sopranos should be a bit over the other groups (perceived level). If there is a leader or lead, then the leader has to be slightly on top. Compressors (properly used) are a huge help in placing the lead voice in the mix, and they also free you from having to “ride the faders” all the time. Another use for the compressors is that they help to maintain the harmony (i.e., the relative level between the different voicings). After the initial compressor setup, use the compressor output level and the faders to fine-tune the balance.

E) The perfect balance is reached when you can’t distinguish individual voices or singers (besides the leads). The entire choir or group sounds like one huge instrument or an organ.

F) Once your voices are mixed, use the console’s sub-groups to set the balance between the music and the vocals. In general, the vocals are set around the same level as the music. What makes the vocals stand out in the mix should be how well you planned and managed the frequency distribution of the band and the vocals. When “EQing” the band’s instruments remember to leave room (frequency wise) for the singers.

FX (Effects) I have to confess that I’m a big fan of effects, but can’t use them all the time for various reasons. A mix must be artistic, and part of this is refraining from certain things we like and being sensitive to each song—and even to each performance of the same song.

Some songs may require long reverb, while other songs require nothing at all. Reverb and delay can be used subtlety to provide depth to the vocals. In some particular (and extreme) cases, long delays can be used to create the illusion of a second BGV group repeating a small passage. Be creative and feel free to experiment. Not all songs require the same reverb or delay. As with any piece of gear, know your FX processor(s) and parameters.

Perceived balance of vocals and the band—when mixing the same group performing a well-known song (to you) on a regular basis, unconsciously you might tend to put the vocals at a level (relative to the rest of the band) too low, thereby making it hard for the audience to hear them. Now, you may “hear” or perceive the lyrics clearly because you already know them and/or have heard them many times. However, this is not the case for the audience. (I’ve seen this psycho-acoustic phenomenon happen with professional shows and tours many times.)

Your ears are your most valuable possession. They are more important than your legs or arms (food for thought). So take good care of your ears by visiting a hearing specialist at least twice a year, and don’t ever introduce anything solid into your ear channel, not even to clean it (even a cotton-tip stick can cause damage to your ear drums).

Every time you hear a sound, your brain tries to decipher what it is and what it means. This indicates that those structures of your brain dedicated to process sound, communication, and speech are constantly working, even when you’re just sitting around the house doing nothing or even sleeping. Particularly when working with audio, this consumes energy and eventually you get tired. Behold, you’ve reached the threshold for hearing fatigue. It happens even at lower sound pressure levels. A good way to prevent this fatigue is by taking regular breaks when exposed to continuous music, say, every 30 minutes or so.

Flu, cold, allergies and congestion affect your perceived sound field and also the frequency response of your ears. Avoiding mixing if you have one of these conditions.

And finally, don’t fly-by-wire: Use your EARS, not your eyes. Be prepared, plan ahead, and take notes. The goal is professionalism and excellence on your part.

Jose David Irizarry has been heavily involved in live sound for almost a decade, mixing Christian music and popular events, and he’s also currently the technical director at his church in Canovanas, Puerto Rico. He can be contacted at josedirizarry@gmail.com

Jose does a great job of capturing the multifaceted aspects of mixing vocals. If you want to go even further, check out my FREE 10,951 word Vocal Mixing Guide!