Have You Been Caught By These Five Production Surprises? 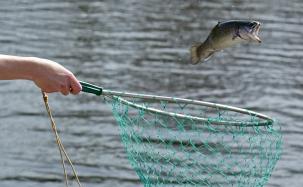 Don’t get caught without a plan!
Photo by matthew_hull

Fly fishing Sunday night, I cast my new imitation blue dragonfly onto the water.  A small fish, about five inches long, took the fly and the fight was on!  Ok, it wasn’t much of a fight.  Not yet, anyway.  I pulled in my line, with the little fish in tow, when WHAM I got the surprise of the night. The WHAM was from a Largemouth bass gulping down the fish on my line.  No longer was I pulling in a tiny fish, I was now fighting with a two or three pound bass.

In my younger naive days, I would have fought with all I had and promptly snapped the light line.  This time, with wisdom on my side, I let the bass take all the line it wanted because the only way I’d land it was if I slowly tired it out.

Production surprises, like my fishing story, can come at any moment.  Whenever ANY type of surprise occurs, ranging from a mid-service equipment fail to a last-minute request for an extra microphone, the most important part of dealing with it is how you react…and having a plan makes all the difference.

My church runs a digital system (mixer, snake, IEM system) all hooked into a couple of mix engines.  If one of those mix engines fail, and they have failed, what do I do?  I could frantically run around and check every cable connection while muttering a few words under my breath.  The congregation would notice my anxiety and the pastor would certainly notice it.  Now, everyone is uncomfortable and they don’t know what will happen next.

Contrast that with a reaction in which I say there is an issue which will take about 5 or 10 minutes to resolve.  I shut down our system, have the stage manager shut down the stage rack units, and then do a full system reboot, loading the saved settings into the system.

It’s OK that surprises happen.  They happen to everyone.  The difference is in how people react.  Preparing your list of possible surprises and your reactions is a great way to be ready when the next one hits.  The next time it happens, you will know exactly what to do.

Conversations concerning last-minute requests can get into debating whether we “allow” these or not.  For example, if a musician came up two minutes before the service and said, “instead of in-ears, I want to use a floor monitor.”  Let’s push that conversation aside and talk about last-minute surprises that we have to accommodate.

A great example of a last-minute request with significant impact is that of adding a musician.  Let’s say the worship leader comes up to you right before the service and says, “Chris is back from college and really wants to help lead worship today.  Where can he plug in his guitar?” Let’s go with the assumption you have room on the stage and an available channel.

Start by evaluating the stage needs.  You’ll need a stage drop for his guitar.  Does he sing?  Ask if he needs a vocal microphone.  Next, where should he be on the stage?  If he’s running through an amp then you don’t want that amp pointing at the keyboardist.  You need to find the best setup given the existing stage arrangement.

Second, what about monitoring needs?  If you have an in-ear system, do you have an available unit for him to use?  Given the last-minute arrangement, he doesn’t have time to set a great monitor mix in the in-ears.  He could go up and dial in a close approximation…which you’d want him to do.  If you have floor wedges, consider an existing floor wedge monitor he can use with a mix close to his needs, such as that of another guitarist.

Finally, you’ll need to set his gain.  If at all possible, do this before the service.  If you don’t have the time, tell him you’ll do it during the first song.  In that case, make sure other musicians don’t have his channel in their monitor as you don’t want to throw off their mix.  If you do set the gain during the first song, let him know when you are done so he can set his in-ears if he’s using the in-ear system, or bring him up in his floor wedge if he has his own.  There are a lot of variables in this situation.  These are variables known only to you.

I will say this about those last-minute additions; don’t go for ideal, go for good.  This would be true of his monitor mix and definitely your own mix.  Now you are mixing in another instrument that wasn’t in the original mix during the practice.  I’d go with fitting this additional guitar into the existing mix compared to re-mixing everything.  Cut out a bit of frequency space and fit the guitar in there.  But then, as you know, every band and every song is different so do what is best in your situation.

A few weeks ago, I was following a twitter thread on a church that went acoustic because of a critical equipment failure.  As you can see, equipment failures can be drastic or they can be as simple as a dead microphone battery.

Simple equipment failures would be problems like a dead microphone battery or a cable that stops working.  In these cases, have equipment in place that can be quickly pulled into use.  For example, you could keep a spare vocal microphone (wired or wireless) on a stand which could be grabbed if a microphone went out during the service.  In the case of cables, have a few spare cables at the ready so they could be swapped if necessary.  You can go the emergency route and keep a wired mic on a stand with a DI taped to the bottom, with cables at the ready.  In case of an emergency stage equipment failure, you have a wired mic, DI, and tested cables available.

What about massive equipment failures?  Mixer failure?  Amp failure?  You should have a plan in place for dealing with such issues.  If your mixing console dies, can you pull in a backup mixer or the mixer from the youth room?  Would it work with your main sanctuary equipment?  What is the least that you could do to make it work?  Consider this thought; all you need on stage is one microphone.  In the worst case scenario, as long as you can get one microphone working on the stage and playing through the system, you’ve got enough to make it through the service.

Outside of the idea of spare equipment, what can you do to minimize the impact of an outage?  I caught an article the other day, by Ken DeLoria, that spoke on this very idea.  One idea Ken put forth was in arranging amplifiers so they powered house speakers across different frequency ranges;

“The amps can then be circuited so that one unit can power LF [low frequency subs] and HF [high frequency speakers]; another LF and MF; another MF and HF, and then repeat as needed. Doing so offers three distinct advantages: First, if an amp fails, only a section of the system will go dark, rather than an entire bank of LF, MF, or HF drivers.

The second advantage is that the amplifier’s power supply, which is typically common to both channels in most two-channel units, will not be stressed as hard as it would be if both channels are only powering LF, because LF normally requires a lot more power than MF and HF. Headroom and maximum available power to the LF load will be improved, and with the lower overall demand on the power supply, reliability and longevity will increase.

The third reason is that you’ll only need one amp model for spares, rather than several. While there is a cost penalty to configuring a system this way, the collective benefits may very well outweigh the added expense.”

Surprise!  This is an area for being proactive and reactive.  Being proactive means you are watching the stage and listening for the beginning of feedback.  If a singer is standing close to a monitor and starts to drop the microphone to their side, then immediately mute the channel.  If you hear a bit of ringing as the start of a full-on feedback attack, EQ out the feedback by cutting back on the frequency that’s getting excited. While the feedback did occur, as you caught it early and dealt with it, I’m calling this being proactive.

There is a time to be reactive.  When you get a sudden full-on feedback attack, pull your house main back immediately until it goes away.  You now have a few extra moments to look at the location of instruments and monitors on the stage and to review your mixer settings.  Once you’ve done that, you should be able to identify the source of the problem and take appropriate action, such as turning down the gain on a channel or pulling a volume back.  Preferably the latter so you don’t mess up your monitor mixes…but there is a time and place for everything.

You can plan for feedback issues by training the musicians in proper microphone usage, as a means of proactively preventing feedback.  You can also plan for it by knowing what you’ll do when it happens, as I explained above.

I’ve been guilty of this one.  It’s usually a small mistake on the board but it has a severe impact.   For example, you have all of the band’s channels on and faders up but you forgot to bring them up in the subgroups, which is why you don’t hear them in the mains when they start singing.  Most of the “I forgot” problems are related to being heard.  In rectifying this type of situation, also bring that channel’s fader down, make the correction, and then fade their volume back up.  You don’t want a sudden jolt of sound.  Yes, the congregation will likely know a mistake was made but fading in the correction is less distracting then the sudden jolt of a full-on sound.

Surprises happen when people on stage do something unpredictable.  A perfect example is when a person grabs the wrong microphone.  Don’t waste your time worrying about that fact that it’s the wrong microphone, just turn on that channel and make whatever EQ/effects adjustments are necessary.  For example, if a person walks up to read scripture and grabs a singer’s mic (the mic you set up with heavy reverb) instead of the speaking mic, then turn on the mic and turn off the effects.  You can make EQ changes if needed but first get them that clear / non-distracting sound.

I’m ending the list here because you should remember you can’t control everything.  I’ve have a guitarist unplug their rig at the end of the worship set when a song was still in the last a ccapella chorus…POW!  Why they opted to unplug at that time is beyond me.  They had never unplugged early before.  And while I can watch the stage for some things, there are some things I (you) can’t catch because it’s completely unexpected.

You can’t plan for everything.  You can’t control everything.  That’s ok.  But, there are surprises that aren’t really surprises at all because you know they are bound to happen.  Plan for those.  Prevent them proactively.  When they do happen, confidently and calmly deal with them according to your plan.  And if you don’t have a plan…relax, think, and proceed.  Anxiety doesn’t help anyone.   Welcome to the world of live audio.

As a follow-up to the fish story, the bass finally won.  Eventually, the fish made a fast run for deep water and snapped my line.

Another day,
another time,
another fish,
upon my line.

Questions: What production surprises have you experienced?  What did you learn?