I thought I wouldn’t change my mind about the StudioLive mixers. But, I agreed to demo a StudioLive Series 3 32S and 24R mixer. In my demo setup, the 24R is functioning as the digital stagebox feeding the 32S but can also work as a remote controlled mixer.

As it turned out, these mixers are nothing like the former series of the StudioLive mixers.

I received the mixers two weeks before our big Christmas Eve service. If not for FedEx delightfully screwing up and losing the 32S for a few days I would have had three weeks before Christmas. So, to say I was in a bit of a time crunch would be an understatement.

The PreSonus mixers were replacing the Allen-Heath Qu32 mixer and AR8412 stagebox that my church had been using for the past 4 years. My plan was to demo the StudioLive mixers initially for how they sounded and then put the Qu32 back in for service for the big event. 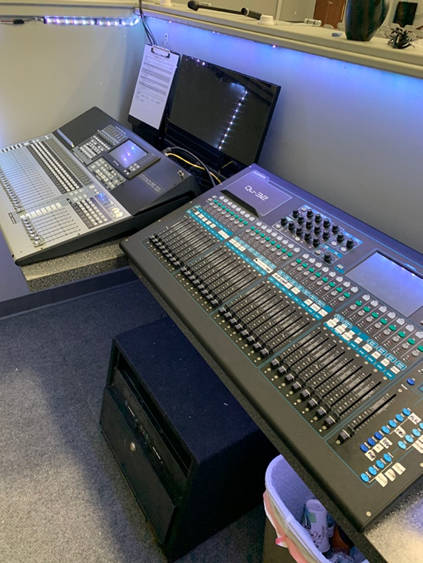 It’s probably about 10 pounds heavier than the Qu32. Here’s a picture of the two of them side-by-side.

They’re both similar in footprint with the Qu32 being all in one plane whereas the 32S has the screen area and FAT channel being angled more than the fader area. The shelf for holding your iPad (at least that’s what I call it) is bigger than the Qu32 as well as is the screen.

Buttons have a rubberized feel to them and are translucent so the colors change depending on the function and also serve as “selected” and on/off indicators. Faders are full 100mm and feel as good as the Qu32 or SQ7.

I suppose I’m spoiled by the digital world now, but I think a live sound mixer really needs to have digital scribble strips as a requirement. The 32S has them. The controls on the 32S feel solid and quality. The faders are smooth, the buttons have a solid feel to them. The touch-screen is responsive and adjustable in brightness. There are multiple levels of user authorization along with the ability to restrict user levels to certain functions.

The Control Panel on the FAT channel layout is pretty intuitive. There are scribble strips that change according to the function selected. Effects Masters have designated mute buttons for each of the 4 effects masters. 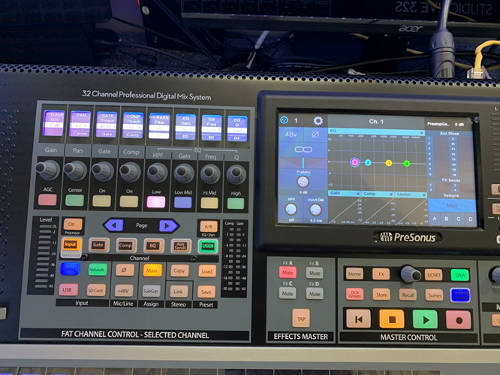 A neat feature is the ability to do an A/B comparison on EQ settings. This allows you to quickly make a change to EQ settings for a specific channel or bus and then by pressing the button make changes that you can audition without altering your original EQ settings. You can also use it if a musician changes between instruments on the same channel. 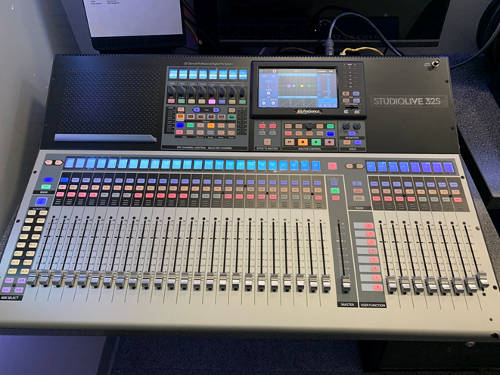 To page around all the inputs requires the press of the PREV and NEXT buttons above the other buttons. The USER button is user-assignable to be whatever you want to show on the channel strips. In my set up I have the first 24 set up for input channels, then on the other side of the main fader, my 4 effects and 4 DCAs.

Now about the StudioLive 24R. It’s a rackmountable 24 channel mixer that can be used as a standalone mixer, a dumb stagebox, or an intelligent stagebox with full DSP capability. Why did I go with this configuration instead of the PreSonus SB16 stageboxes? Simple. For one thing going with the 24R versus 2 SB16 stageboxes is about $800 cheaper. For another, I get a lot of flexibility. If I need to use the 24R as a standalone mixer for an outreach event I can just pull it out, use it with an iPad or my computer, then put it back into service as a stagebox.

Several of the functions are allocated to dual-use buttons. For example pressing the Talkback button quickly puts it into lock-on mode. Holding it down while you’re talking and then releases it makes it function as a toggle. The Select buttons also have similar multi-functionality as well as the DCAs.

You have the ability to alter the behavior of the mute switches so that when you mute the channels it also mutes the auxes or it can stay with just FOH muted with the aux mutes independent of the FOH mutes.

The audio quality is very nice. I think it has more depth and clarity than the X32 or Qu32. The board output is definitely more substantial than either of them. And there’s a handy knob in the back to adjust the output level to your requirements. Effects are decent and you have the ability to download effects direct from PreSonus with some vintage sounds. I wish there were more options for effects but, for most of what I do, the included effects work fine.

Some quibbles for me and my live sound perspective. A tone generator should be on a live board. Similarly having the scene name on the bottom of the screen at all times would be helpful. A major request would be the ability to edit your scenes and projects offline. That is just such a tremendous time-saver. It would be great to also have access to a meters view and a multi-band compressor. I know that you can see all the meters on the tablet or computer app but having it available on the board is a big help.

I’ve barely scratched the surface in terms of capabilities of this configuration. I love that you can do multi-track recording direct to a SD card on the console or through a USB interface to Capture on your computer. What’s really cool is to do a virtual soundcheck with the SD card is crazy simple. Two button presses and you’re in virtual soundcheck mode. Interestingly what gets recorded to the SD file as well are the board settings so when you play the file back it also recalls the channels as when the file was recorded.

Monitoring mixes is easy. I think one area that PreSonus excels in is the quality of their computer apps. The Universal Control app for the computer and tablet is first-rate. The QMix-UC is an easy-to-use personal monitor app. A unique feature is that for anyone to use a remote device permission must be granted from the board and it can be assigned per device. The board also has multiple user-access levels to give everyone their own login.

All in all, I’m impressed with the PreSonus StudioLive 32s and 24r combo. I love the sound quality and depth that I can achieve easily. The board feels as solid as any other in this price range. The apps help extend the mixers qualities. It’s easy to setup and use with a custom user layer.

As a matter of fact, I was so impressed with the sounds coming out of this combination I went ahead and purchased it for my church as a permanent replacement to the Qu32/AR2412 combo that we had. These are nothing like the former series of the StudioLive mixers. PreSonus went back to the drawing boards and brought out a serious contender in the price bracket. You owe it to yourself to look at one, demo it, and compare it to the other mixers in the price range before you make a decision.