Review of the THOR:HAMMER Headset Microphone – Tried and Tested

There are many options in the headset microphone world and price points being what they are, I’ve been on the lookout for an affordable sturdy great-sounding headset mic – you know, a great deal!  Over the last six months, several of my friends have recommend the THOR:HAMMER and I thought it was time for me to test it out.

As it so happened, I discovered I knew the person behind the HAMMER and he agreed to send me one to demo.  Would it really stand up to the audio quality of the “big name” microphone companies?  You’re soon to find out.

Let’s start with the details. 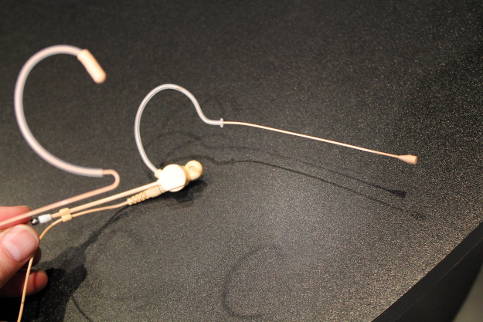 The THOR:HAMMER can be set up as a dual or single ear worn omni-directional condenser microphone that’s good for pastors and worship leaders so they can use both hands for other things, like playing guitar or holding a bible or iPad.  Additionally, the microphone is tuned for clear, articulate reproduction of both male and female voices.

The single-ear side, with the microphone on a lightweight flexible metal boom, can be secured to the head band to convert it to the dual-ear version.  Note the connection below. 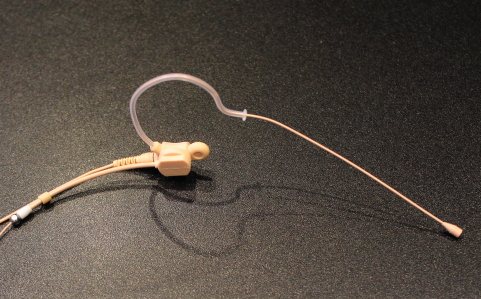 In the above photo, the small sweat guard is pushed up to the bend in the microphone on the upper end of the boom, something that was done by my worship leader when he tested it out – I’m not sure why.  The dual-ear setup is also sizable by pulling the two wires apart at the point where the bead is located in the below photo. 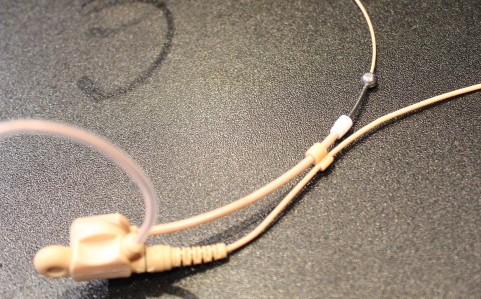 Capable of handling up to 115 SPL, the microphone comes in beige or brown and has a sturdy, yet replaceable, locking cable that’s available in four different connections depending on your wireless transmitter:

The microphone’s sensitivity is -67dB ± 3dB, with a frequency range of 20Hz – 20,000Hz. The weight is only 8 grams, not including the cable.  And with the included cable clip, that cable weight won’t be noticeable.
The frequency response, as seen below, is rather flat until around the 5kHz point at which point it has two boosted areas common to vocal microphones.

It comes in a solid clam shell case that protects the microphone as well as the wireform-shaped wrap-around head band. 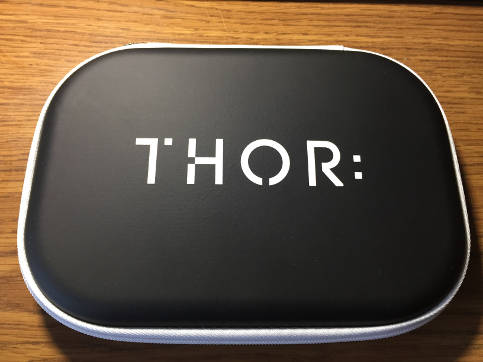 Finally, to finish up the specs portion, the THOR:HAMMER carries a 6-month manufacturer’s warranty.

Who is behind THOR?

I mentioned I knew the person behind the microphone.  Specifically, the THOR team is made up of a seasoned group of audio-video professionals of which Stefan Svärd, owner of Audio Video Electronics (AVE), is the lead product engineer.  AVE provides audio, video and lighting design integration solutions throughout the United States.

I’ve known Stefan for some time and on top of being the owner of AVE, he’s been a contributor to the Behind the Mixer Facebook Group for several years.  His experience in the AVL field enables him to know the demands we have for head-worn microphones both in sound quality and in durability.

Find out more about THOR via their web site and Facebook page.

My worship leader has used a few microphones as he’s stepped in to preach a sermon as well as lead worship.  Between a Shure ULX for singing and a Countrymen E6 for speaking, I’ve been able to get a good sound from mixing with those microphones.  Then he put on the HAMMER set up with the dual-ear mount and I was immediately sold on it.

Before handing him the microphone, I’d flat-lined the channel EQ.  No effects, no boosts, no nothing!  And the minute he started talking we all noticed the difference.  It was indeed very clear that it wasn’t just an improvement over what we’d been using but it was a great sounding mic on its own.

The worship leader, Jason, noticed the sound.  The production director noticed the improvement.  In fact, everyone in the room love it.

Jason said he loved the clear sound that seemed tuned for the spoken word and that even though he moved around on the stage, the microphone didn’t move and he didn’t have to worry about repositioning it.  In his exact words, “it just stayed put.”

I did tweak the EQ just a little, but only with what I consider standard processes like rolling off some of the lows and cutting a bit from where Jason’s voice was a tad harsh – a characteristic of his voice, not something the microphone introduced.  But it was nothing compared to what I usually have to do.  The microphone’s high-end boost around the 5+kHz was helpful.  Straight up honest, we were all impressed with the quality of the sound even with the EQ first flat-lined and that, to me, says a lot.

I was a little surprised by the microphone’s lack of a substantial frequency roll off below the 140Hz area.  That being said, I’m of the mind that I want as much control at the mixer as possible…and don’t we all usually hit our vocal microphones with a high-pass filter anyway?  (I’m not as wishy-washy as I sound – my favorite color is blue, no….black) Anyway, as I mentioned, Jason’s voice sounded great with the channel EQ flat-lined.

Regarding the locking cable, it’s firmly seating and will not come loose.  It took a lot of effort to pop it in place and there was no way it would work loose.  If I snagged that cable on something, it would pull the headset with it.

The clam-shell case is nice because it’s thick enough that it holds the head band and microphone without overly bending anything so it’s a great way to protect the microphone and headset.  Also, I like each pastor to have their own microphone.  This means if I have two pastors that speak during the service, they each have their own microphone that’s strictly used for them.  With the clam-shell, I can label the case with their name or even have one labeled for Guest.

Here’s the case, freshly opened, to show the size. (Ah, nothing like that new-mic smell.) 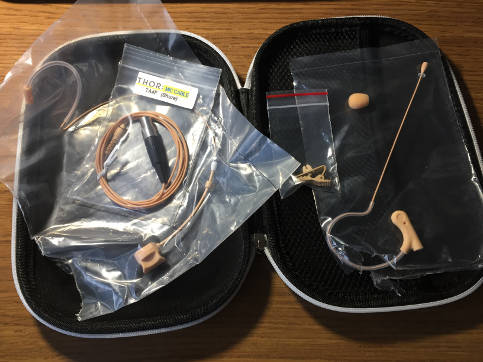 I mentioned that a number of my friends recommended this microphone.  Several of them work in the professional audio arena and I know if anyone is going to be picky about gear, it’s going to be them. So, even knowing the THOR:HAMMER sounds great out of the box, their reviews proved it’s also a microphone that can stand up under heavy use.

My One Minor Request

I appreciate the single / dual ear option, though I wish it was also available in only a dual-ear version so the structure of the mic-side connection could be a little smaller. No one else noticed it when we tested it out so I’m marking it as a minor point, but one I wanted to mention.

There are many head-worn microphones available and they run the range in price and quality.  The THOR:HAMMER is a wonderful-sounding microphone, that comes in at a respectable price level ($299), and I’d gladly use one any day of the week.  I also know Stefan, how much he demands from equipment, and knowing he’s behind the HAMMER is a sign it’s a rock-solid microphone.  Plus, as mentioned, there are people I respect in the pro audio community who use it.  All in all, it’s a microphone worthy of consideration.