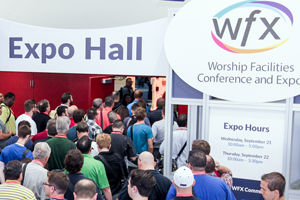 WFX 2017 was a terrific expo with all sort of AVL and even facilities equipment like congregational chairs – sorry, no recliners just yet.  Could you guess WFX stands for Worship Facilities Expo?  But let me get to the point – WE DID A VIDEO.

Now hold on, we aren’t winning any awards for this one.  In fact, the moment we walked on the expo floor, we forgot about doing the video because we were SO COMPLETELY HAVING FUN!

So what the heck is in the video?

It’s a bit of everything. In fact, we might have had more fun making it than you’ll have watching but who’s to say!  We meant to dig into the new gear we saw but there wasn’t much that was “new” in the audio realm.

That being said, Allen & Heath has released the ME500 personal monitor mixer unit that’s like the ME1 but with fewer options and a smaller price tag.  And myMix has a feature-filled IEM system that’s grown into a robust but practical system for advanced usage.

We did check out the loudspeaker demo and TW Audio (T24N) has some great compact speakers along with great stuff by Community (I Series), Nexo (STM M28 and GEO M10), and RCF (HDL30-A and HDL6-A)…and of course, Clair Brothers (C12)  As a side note, out of 13 manufacturers demoing speakers, most are from outside the USA.  Three were from Italy.

And then there was Tactus…which I completely missed.  I don’t know how.  As many times as I walked the floor, I don’t know how I missed it.  Peavey’s new Tactus mixing system is a surface and I/O units designed to work with the Waves eMotion LV1 64 Stereo Channel Live Mixing Software.

Now for the video!  (We’ve taken the audio and used that for the latest podcast episode!)

Whoa!  Wait!  I forgot to mention that we left our crew of lighting professionals at home and we made do with what we had.  I know the lamp castes a ring around my head…I can promise you it’s not a halo. :)

And for you podcast folks, here you go: