The Ten Steps to Mix the Pastor’s Mic

The pastor’s mic might seem like it doesn’t need mixing compared to mixing vocals for a band. However, our speaking voices can leave a bit to be desired. Consider these traits: nasally, gravelly, pitchy, and muddy. While those can reach extremes, what’s important to know is that a crisp, clear, rich voice can make listening more enjoyable during a sermon but most of all…it guarantees people can understand what is said.

Hearing the pastor and being able to understand their words are two different things.

Let’s dive into the 9 areas where you can improve the quality of the pastor’s voice.

Proper microphone selection can’t be overstated enough.  The quality of audio starts at the source and a mic that sounds bad isn’t giving you anything good to work with.

There are many brands and models of vocal microphones on the market and below I’ve listed recommendations across price points.  Let me be clear that pastors, priests, clergy, whatever title they may have, can have personal microphone styles. I prefer my pastor to use a head-worn microphone so the mic is always at the same distance from their mouth.  However, some people will only use lavs or handhelds. So be it and therefore I’ve listed those options below.

A Note on Microphone Properties

Regarding the mic properties, the one mic property that seems to vary with these is the polar pattern. It’s usually an omni-directional mic or a cardioid. As long as the person isn’t using a floor monitor, an omni will usually work. That’s not saying one sounds better than another, it’s just a matter of the stage situation.

Note these headsets work with most major brands of wireless systems as long as the right connector is selected when purchased. In the case of the Sennheiser, you’ll need to pick up something like the Pro Snake AKG TQG – Sennheiser EW – thanks to reader Rob B. for that trick. 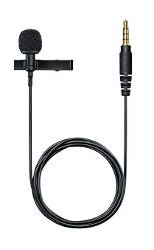 Head-worn mics are usually purchased separately from the wireless system whereas lapels (or lavaliere mics) usually come with the system.  Same with handhelds. Therefore, the below include the systems.

This can be free-standing on a mic stand or attached to a lectern.

Equally important as the mic selection is microphone placement.  The wrong placement can result in amplification of the sound of breathing or barely any sound at all.  Let’s look at these three placements.

Go for the corner of the mouth, about ½ inch away from the face. Have the pastor test it.  If excessive popping or sibilance is heard, move it out a bit. Also, listen for the sound of breathing.  Move it up and down to find the sweet spot.

Don’t be afraid to bend the wire around their face if they have facial hair, to prevent the scratchy sound you might hear.

Some of the placement is controlled or restricted by the length of the boom that holds the mic.  Here’s a shot of my pastor with his mic. 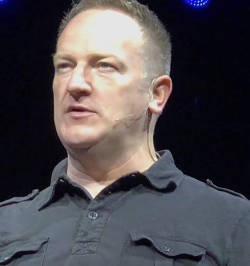 In the case of the lapel mic, the user should drop their chin to their chest and clip the mic a couple of inches below that point.  I was taught, “a fist away from the chin.” You want the best sound isolation possible and a good gain structure in place. Remember, the closer to the source, the more the proximity effect comes into the equation and you’ll need to EQ out some of that added bass-iness.

With singers, we often say to “kiss it” as this closeness helps with sound isolation on a noisy stage.  With the spoken word, I’m OK with 3 or 4 inches away AND always maintaining that distance. As soon as it gets too far, the volume drops and there is only so much to gain to boost it without feedback problems.

This will usually come in from the side of the lectern or even on a mic stand.  Place them around 10-14 inches away. Some lecterns might be set up with the mic mounted in the center and that’s ok.  The off-center placement helps reduce the sound of plosives (p’s and t’s).

If you use two lectern microphones, check out this article by Shure.

3. Check the mic before and after the service.

For goosenecks, before the service make sure they are in the right location.  Also, check to see if they are dirty. Nothing like a chunk of food on a mic. If they don’t have a windscreen then use an alcohol wipe. The same goes for handhelds and other mics as far as cleaning.

For all wireless pastor mics, check them before the service for battery levels.

When it comes to lavs and head-worn mics, check the cable connection, the cable, and the mic itself.  If it should have a windscreen, is it still on the mic? The little buggers sometimes have a mind of their own – the windscreens, not the pastors.  Make sure any cable clips are still around.

Also check the metal wires of the head-worn device itself to make sure nothing is cracked or broken.

4. Set the gain and avoid the feedback

The goal here is maximum gain-before-feedback.  I’ll assume that if you’re using a wireless mic that you have the gain of the transmitter correctly set.

Turn up the channel gain until you hear feedback and then turn it back just a bit.  You’ve now got the best (clearest strongest) signal coming into the channel. You should be able to run your fader within +/-10. If not, adjust the gain accordingly.

If you hear feedback when they are speaking, use your mid-range EQ to apply a relatively narrow cut of around 6dB and slowly sweep through the mid-range frequencies until it goes away.  Some say to start with a boost to exaggerate to find the feedback and then apply the cut. I find that’s more noticeable to those one stage and there sweep with the tight cut.

5. Hit it with a high-pass filter

Now to mixing.  Apply a high-pass filter to the pastor’s mic channel.  Start high, around 200Hz. Listen to what it does to their voice. Slowly roll that down until you find the channel is void of the excess low-end but the HPF isn’t negatively affecting how they sound.  You might end up at 80Hz or 100Hz or 140Hz or somewhere else.

If you need help with the quality of your post-production mix for the pastor, let’s talk. Maybe the audio for the podcast, sermon download, or video recording isn’t what you’d like. Send me an audio file with a few minutes of the raw file and I’ll mix it and make some suggestions.

6. EQ for a great natural (but improved) vocal.

I like the idea of making a person sound like the best version of themselves; clean and clear, void of sibilance, and warm & rich.  Remove the mud, remove sibilance, improve their presence, and make sure it’s easy to understand what they are saying.

First, cut before boosting anything and clean up the problem areas. I’ll listen to the properties of their voice and move accordingly.

I know the above can be a wide range but those are more extreme limits.  It’s like looking for something you lost but you at least know what room it’s in.  Do remember to make thin cuts to only eliminate or reduce the offending frequencies.

As for sibilance, that nasty sound some people make when they say words with an S, T or Z, you can reduce the frequency range using your channel EQ (4000Hz-8000Hz) or use a de-esser which is just for that task.

For boosting, it’s equally about having a range and going from there.

When it comes to boosting, apply a moderately wide boost, quite the opposite of the narrow cut.

Compression on the spoken word is a funny thing.  Incorrectly set, words can be lost or the person sounds muted or over-compressed.

Determine if compression should be used.  If the pastor’s voice stays within a reasonable range and you’re not waiting to jump on the volume fader at any moment, then don’t worry about it.

On the other hand, if they do have a substantial range that will blow people out of their seats, it’s time to get to work.

Use it, don’t use it, it’s up to you!  I have not used reverb in every case where I’ve mixing the spoken word but I have had times when I needed to use it.  The use of reverb on the pastor’s mic enabled me to smooth out their voice and give it a little more body than I could get with just EQ.

Start with room reverb with a quick initial delay and short reverb time.  You want the reverb to enhance the voice, not detract from what’s being spoken.

The pastor doesn’t have a reason to hear themselves in the monitors 99.9% of the time.  The only exception where this has been found is in very noisy locations. If they can’t hear themselves when they talk – and most of us can, then there is a bit of psychology that comes into play.  It’s here where a little of their voice in their monitor is beneficial.

I’ve been to enough different churches and have heard from enough people that, while 99.9% are good, there is that 0.1% that really is too loud to be heard either because of the sound of people or environmental factors.

Test this before the service to find out if any feedback is heard.  If so, reduce their volume in the monitors. You can alter the pastor’s EQ or, if that causes them to lose vocal quality, parallel their channel into another channel and use that channel to feed the monitor and EQ as needed.

During the service, the vocals should sound clean and crisp and easy to understand.  Don’t confuse volume with intelligibility.

Never set the volume for the spoken word too loud.  It should sound natural.  But it still needs to be amplified.  For a general guideline, average speech levels should be in the 60-65 dB range but if it needs to run as high as 75 dB to fit your room, then push it up a little higher.  That being said, if it runs much louder, you’ll get a load of complaints.  Volume does not equal intelligibility and that’s why I left this for last.

The pastor’s mic channel deserves your attention. Make that a priority the next time you’re mixing. If you’d like more help mixing your pastor, your choir, or your singers, check out: